We are bombarded with fake news online ... and in our heads! Ask yourself: is this thought fake news? 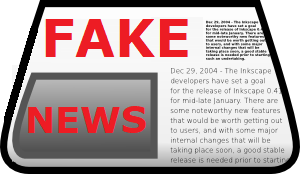 We hear a lot about FAKE NEWS in the media, and we have now been warned to be alert to fake news stories in our news feeds on social media.

It's everywhere!  Fake news is mostly generated by individuals and organisations who have a bias - and want us to believe and buy into that bias.  They distort the truth!

We first started getting alerted to it following major political events in 2016 - the US Presidential election, and the 2016 UK Brexit Referendum.  It is believed that the fake news stories (on all sides), particularly on social media, affected how we voted and therefore the results.

We can see that more now, but we couldn't so much back then - it just wasn't on our radar and most of us tended to believe what we read and saw in our news feed.

What we may be even less aware of, is the FAKE NEWS factory operating with its own bias, in our own minds.

Our mind is constantly working hard at helping interpret the world around us, trying to keep us safe, by trying to match our current situation with what it knows from the past, or things we've head about.   But a lot of the time, it gets things wrong.  Distorting the truth.  It's broadcasting FAKE NEWS!  Radio propaganda.

Don't Believe Everything You Think!

Just as we don't buy everything we see in the online shopping store, so we don't have to buy into every thought we have.

Start to notice your own FAKE NEWS factory!

THE MIND BULLY mp3
(for dealing with intrusive / distressing thoughts)

THE MIND BULLY mp3
(for dealing with intrusive / distressing thoughts)

THE DECIDER SKILLS FOR SELF HELP